The 2nd Amendment And The Musket Myth

The intent of the second Amendment was to insure that every able-bodied man in America would be armed in the event that the federal government or America’s own standing army turned on its people.

Our founders were keenly aware that armament would continue to improve and become more efficient and thus ... the 2nd Amendment has Shall Not Be Infringed as it's foundation.

It wasn't just the government that possessed sophisticated arms ... the Common Folk of the era owned what today's gun grabbers would call militarized weapons.

By the time the 2nd amendment was adopted, (December 15, 1791) assault weapons already existed.

Contrary to what the liberals and gun grabbers want us to believe ... there were repeater, multi-shot rifles even before the Revolutionary period.

The Girandoni air rifle is a repeating rifle capable of firing 22 shots in under a minute without a reload and was developed before the 19th century.(circa: 1790)

The Belton flintlock was a repeating flintlock design using superposed loads, which could fire 20 rounds in 5 seconds with one pull of the finger.

Superposed loads were powder and ball, stacked one on top of the other, and had twelve individual touch holes.

The Puckle gun patented in 1718 was one of the earliest weapons to be referred to as a machine gun.

True, it could only fire 9 rounds a minute but what I get a kick out of .. There were two versions.

The guns were designed to fire round bullets at Christians and square bullets at the Muslim Turks.

Square bullets were believed to cause more severe wounding than round ones, and according to the 1718 patent, ‘would convince the Turks the benefits of Christian civilization’. 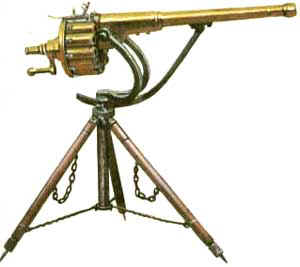 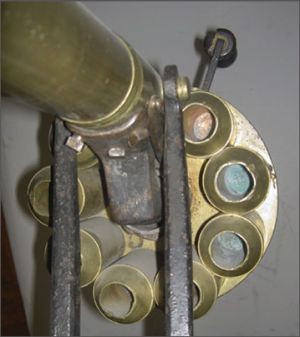 Then there was the 24-barrel pepper-box revolver using percussion cap technology.
(Ugly Cuss) 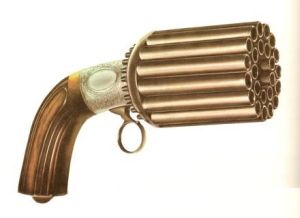 The first pepper-box revolvers originated in the 1500s and used matchlock mechanisms.

This particular specimen was made in the 1850s by a Belgian gun maker and used percussion cap technology.

These are just a few examples of the known hundreds of Military Type Assault Weapons   from eras before or soon after the 2nd amendment was adopted.

So anytime a leftist gun grabber tells you that the second amendment is meant for the type of weapons from that era, tell them fine .. I'll have a Machine Gun!